What Student Leaders Can Do is Amazing…

At the end of 2013 Courtney Ball was elected by her school peers to be the School Captain at Bolwarra for 2014. Soon after, she attended the GRIP Student Leadership Conference with a group of fellow leaders. One of Courtney’s goals for the year was raising money for ‘Peter’s Project’ – a local fundraising group trying to raise five million dollars to build a cancer centre locally so that sufferers did not need to travel to the city for treatment. Courtney showed great initiative throughout this fundraising effort, initially proposing the idea to school staff herself, and then coordinating the majority of the fundraising activities, including her fellow student leaders when needed. Through Courtney’s leadership, their small school (with an enrolment of 109 students) was able to raise an amazing total of $4475.

The major fundraising organised by Courtney was a walkathon. This involved the whole school for two hours on one particular day. Courtney approached the Parents Association to provide coffee and afternoon tea for the adults, organised walk-a-thon sponsorship forms, and motivated the students to participate. Courtney passionately spoke at assemblies as to the reason why ‘Peter’s Project’ was so important, and also advertised the walk-a-thon around the school in any way she could think of. Her efforts did not finish here. She also got the local football club to donate money to the cause, and contacted the local media who published an article on the walk-a-thon. Courtney also led her fellow student leaders in organising the practicalities of holding a walk-a-thon, such as the route to walk, the collection of money, water breaks and a PA system. After the fundraising effort, Courtney personally wrote thank you letters to the different groups who help with the walk-a-thon.

Courtney’s leadership extends to her involvement in team sport. Prior to the local school netball competition, Courtney unfortunately broke her arm and was unable to participate. However, rather than simply not playing in the competition, Courtney organised training sessions for the team at lunch, and ran these sessions herself. On the day of the competition, the normal coach was unable to attend at the last minute. So, Courtney took on this role, and coached the girls to victory against seven other schools. Although she might not have been be the best player in the team, as coach, she garnered the respect of her peers automatically through her actions and attitude.

Courtney also established an outstanding reputation amongst the parent body at the school, by taking it upon herself to ensure that all the junior students felt comfortable at their new school. Early in the year, new parents to the school would often comment on how ‘wonderful the school captain is as she happily greets our kids each day at the gate and ensures they start their day on a positive note’. Students at the school look up to Courtney as a positive role model, displaying personal excellence at all times in everything that she does.

Courtney has also displayed an ability to overcome difficult challenges throughout her time at the school. In earlier years, Courtney required additional support from the school and her parents in dealing with a student in her class. As a senior student, she is now a mentor to this student and has since become this child’s greatest ally. She is able to empathise with this student, and has made her peers aware of the correct way to treat other students. Having once been fearful of this student, Courtney has shown a great ability to engage in situations outside of her comfort zone.

Courtney has shown an exceptional ability to lead her peers throughout 2014, and has impacted her peers, younger students, parents, teachers and the wider school community in all that she has endeavoured to achieve. She has shown a desire to place value on others both within the school and in the wider community, and has been generous in her actions and with her time.

Courtney’s story (and many more) has been documented in the book ‘Great Student Leaders’ which was published as a supporting resource to the GRIP Student Leadership Conference. 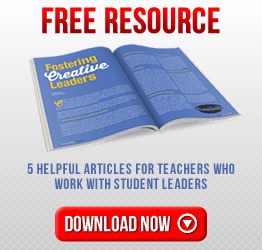